With gas-phase ions, which make up gas discharges and plasmas, accounting for more than 99% of the known matter in the universe, one would think that engineering and science students — even the general public — might understand more about them. Plasmas and gas discharges affect everything from lighting and transportation to water purification and electronics. Yet plasma science requires broad understanding of engineering, chemistry and physics, making it difficult for students at the beginning of their careers to access. 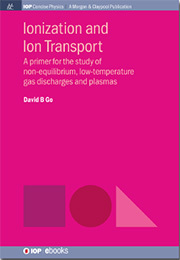 Ionization and Ion Transport, the new textbook written by David B. Go, the Rooney Family Associate Professor of Engineering at the University of Notre Dame, and published by Morgan & Claypool, introduces engineering and science students to the basic concepts in physics and chemistry that form the foundation of plasma science and engineering — from gas dynamics and electron behavior to electrode processes and ion transport. Functioning as a primer, the book explores the nature of ions, how they move and the equations used to describe their movement. It also covers specific concepts important to the non-equilibrium, low-temperature gas discharges found in a wide variety of scientific and engineering applications.

Go serves in the Department of Aerospace and Mechanical Engineering and is a concurrent faculty member in the Department of Chemical and Biomolecular Engineering. Although he and his research team examine a wide variety of topics in low-temperature plasma generation and chemistry, they focus on the fundamental processes in microscale plasmas, plasma-liquid systems and plasma-enhanced catalysis, which have important implications in applications ranging from chemical processing and fuel reforming to water purification and energy conversion.

A 2001 graduate of the University, Go earned his master’s degree in 2004 in aerospace engineering from the University of Cincinnati and his doctorate in mechanical engineering in 2008 from Purdue University. He joined the Notre Dame faculty in 2008.

Originally published by Nina Welding at conductorshare.nd.edu on June 07, 2018.