Solar photovoltaics (PV) is now a multibillion dollar per year industry, with ~51 GW of PV installed in 2015 and more planned for 2016. While the US generates ~1% of its electricity with PV, countries such as Spain, Germany, and Italy now have 37%of their electricity demand met by PV. Estimates made by the Department of Energy indicate that the US may in time increase to ~10% of electricity from PV, but further growth will be greatly slowed without low cost energy storage. In the first part of the talk, I will discuss prospects for hybridizing concentrator photovoltaics (CPV) with concentrating solar power (CSP) to produce electricity efficiently while simultaneously generating dispatchable heat energy stored in thermal fluids at ~400°C. In the second part of the talk, I will present my group’s efforts to realize low cost, high efficiency IIIV on Si tandem cells as another means to increase PV adoption. I will show that single crystal IIIVs are the only known materials that have demonstrated higher cell efficiency than Si, and are thus the most suitable candidates for integration on Si. Historically, materials mismatch between IIIVs and Si have led to very high defect densities and low solar cell efficiencies. We have recently reduced defect densities by ~40x, enabling dramatic increases in efficiency. In both projects, I will show that our efforts are tied together by expertise with growth, characterization, and device applications of novel electronic materials. In the concluding part of the talk, I will discuss some future directions, including novel type I mid infrared lasers grown on INP substrates. 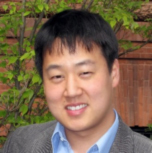 Minjoo Larry Lee received the Sc.B. with honors from Brown University, Providence, RI inf 1998 and the Ph.D. in electronic materials from the Massachusetts Institute of Technology (MIT), Cambridge, MA in 2003. From 2003 to 2006, he was a Postdoctoral Researcher with the Microsystems Technology Laboratory at MIT, and from 2006-2007, he was with the Center for Thermoelectrics Research at RTI International in Durham, NC. In 2008 he joined Yale University in New Haven, CT as an assistant professor of electrical engineering, and in 2013 he was promoted to associate professor. He is the author or coauthor of over 100 technical papers and conference proceedings and holds nine patents. He has received numerous recognitions including: the North American conference on MBE (NAMBE) Young Investigator Award; The Lange Lectureship in Materials at UCSB; DARPA Young Faculty Award; NSF CAREER award; and the IEEE Electron Device Society George E. Smith award. His advisees have won 7 best presentation prizes at the IEEE Photovoltaic Specialists Conference, MRS fall meeting, Electronic Materials Conference, and NAMBE. In 2015, he was awarded Yale’s Ackerman Award for Teaching and Mentoring in recognition of his introductory course on circuits and electronics.