Abstract
Research into the many exciting possible applications of nanomaterials has exploded over the past twenty years. One of the foremost areas of interest is in the various forms of electronics that could be improved or enabled by nanomaterials. While consumers continue to see a world of ever-improving technological gadgets, the underlying hardware has run into many ominous challenges. For instance, Moore’s Law, the well-known marching orders of increased transistor count every generation of integrated circuit technology, has struggled and, according to some, reached its end. Based on the foreboding scalability and power challenges of silicon transistors, innovation in the semiconductor industry is imperative. Many researchers have proposed that nanomaterials can provide remedies for the woes of silicon-based technology. From 1D carbon nanotubes (CNTs) to 2D graphene, transition metal chalcogenides (TMDs), and the so-called X-enes, the list of options and their purported saving potential will be reviewed in this talk. The TMD and X-ene crystals have become especially popular due to their true 2D structure combined with an intrinsic band gap—the envy of their counterpart, graphene. In addition to the promises, the remaining problems to realizing a nanomaterial transistor technology, including the material purification and placement, will then be considered along with some of the latest developments toward overcoming these obstacles. Finally, a brief review of how these nanomaterials could impact other aspects of electronics will be considered, including their ability to usher in a completely new form factor for computing. 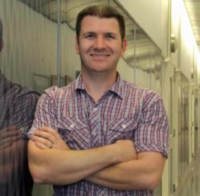 Dr. Aaron Franklin received his Ph.D. in Electrical Engineering from Purdue University in 2008 and then spent six years on the research staff at the IBM T. J. Watson Research Center in Yorktown Heights, NY. He is most widely known for his work on low-dimensional Nano electronics with specific emphasis on carbon nanotube (CNT) transistors, including device scaling, transport studies, and advanced integration approaches. While at IBM, Dr. Franklin was involved in many other projects with applications including photovoltaics, thin-film transistors, and supercapacitors. Dr. Franklin joined the Duke faculty in 2014 and now leads the Laboratory of Electronics from Nanomaterials, which has two primary research thrusts: 1) nanomaterials in high-performance Nano electronic devices and 2) nanomaterial inks for low-cost printed electronics.