Abstract: Low-dimensional molybdenum and tungsten-based nanomaterials consist of nanowires (NW) [1] and nanotubes [2], nano-onions [3], as well as monolayers [4], nanobuds with nano-onions attached on the surface of the nanotubes [5], and nanopods called “mama”-tubes [6], where nano-onions are spontaneously grown inside nanotubes, etc. Two main growth procedures were developed for production of MoS2 and WS2 nanotubes: growth from vapor phase using chemical transport reaction, and a template sacrificed process in which MoxSyIz NWs or WO3-x NWs represent the starting materials. Since the MoS2 nanotubes and thin flakes grown from vapor phase contain an extremely low density of defects, they are promising for the construction of the field-effect transistors [7,8]. The template sacrificed process leads to nanotube structures with a high density of defects due to mismatch of lattice parameters of original and final compound. Spontaneous partial exfoliation of MoS2 nanotubes [9] synthesized by this procedure enables preparation of efficient solid lubricants, whose tribological properties exceed those of the MoS2 platelets. The 2 wt.% of such MoS2 nanotubes in PAO oil reduces the friction coefficient at diamond-like carbon (DLC) tribological contacts by up  to 50%, compared to using only base PAO oil [10], and at steel contact by 40–65% [11]. This spontaneous exfoliation can be used also for synthesis of MoS2 monolayers with a high stability against restacking, which represents inorganic graphene analogy [4]. Molybdenum and tungsten sub-stoichiometric oxides in the shape of nanowires will be also presented. While MoO3-x is weakly soluble in water, it can be used as antibacterial material [12], the WO3-x NWs are highly electrically conductive [1] and show efficient field-emission properties [13]. Various morphologies of W and Mo-based nanomaterials will be presented and some possible applications will be discussed. 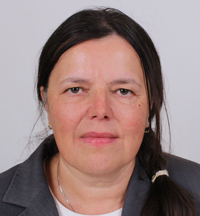 Prof. Maja Remskar is a physicist and senior scientist in the Solid State Physics Department at Jozef Stefan Institute, Slovenia, where she leads the Laboratory for Synthesis of Inorganic Nanotubes and Ropes. She is one of the pioneers in the field of nanotechnology in Slovenia and in general. In collaboration with co-workers, she has discovered different shapes of nanomaterials, especially of transition metal compounds, like co-axial inorganic nanotubes, nanowires, nanobuds and also “mama”-tubes. Her bibliography contains 115 original scientific articles, 8 chapters in books, and 5 international patents in the field of nanotechnology. Her Hirsch index is 24.